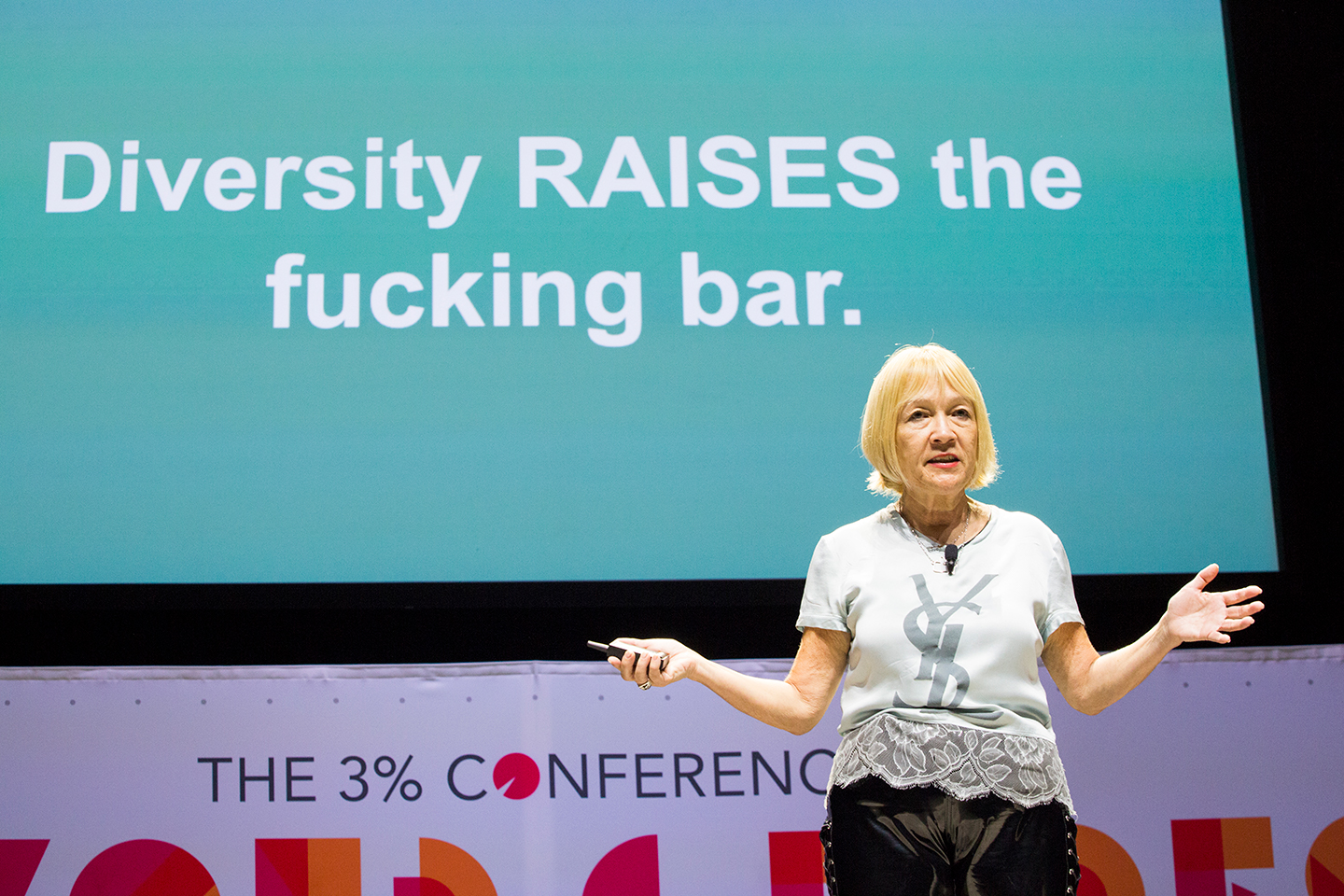 Keynote: Where the Money Is

Shameka Brown Barbosa is a creative director/writer by trade and a woman in the midst of a reinvention. After an unrequited, 17-year love affair with advertising, she’s now working smarter and on her own terms. Although it was unbelievably nerve-wracking at the offset, she has found a way to work remotely, fuel her passions, be present for her family, and dream bigger for herself. Highlights in 2016 have included co-leading the 3% guest blogger effort (thanks for reading, by the way,) contributing to the ADCOLOR Social Media Collective, picking her kids up from school at 3pm, and turning her love of travel into a legit business. When she can find the time, she also really enjoys spontaneous naps. Peruse her storytelling skills at shamekabb.com and connect with her on Twitter.

Cindy Gallop closed out the 2017 3% Conference with a rousing call-to-arms: Achieve true gender equality by ending sexual harassment. Or figure out how to make an absolute shit-ton of money on your own.

Baby, it's cold outside. Budget-slashing, cost-cutting, margin-trimming, debt-loaded, layoff-ridden, hiring-freeze cold. But it was nice and warm inside at The 3% Conference as Cindy Gallop gave us some tips on how to reinvent the industry, unlock the bank vaults, get the cash flowing, ratchet up those margins, and make an absolute goddam ton of money.

From the start, Gallop was about business. She instructed the audience to have their phones at the ready because she would be sharing info on people to follow and things to read. In fact, the presentation was so full of information, you couldn’t help but leave inspired to create some form of change.

But First, A Reality Check

Gallop began with a story about being chosen by Adweek as a recipient of the 2017 Disruptor Award. In her interview for the honor, she candidly admitted to failing to disrupt anything. She acknowledged that despite her efforts, nothing is changing – including her bank account. The ad industry still isn’t putting its money where its mouth is. In fact, the agencies, holding companies, and brands that claim that their principles are equality, diversity, and inclusion are not spending money on those principles.

Sexual Harassment Is An Epidemic

In 2017, the industry is still failing to take women seriously – despite the fact that diversity drives infinite amounts of business. Ahead of her appearance at the first-ever 3% Conference Australia, a shocking report on sexual harassment across Australian ad agencies was released. Among the staggering stats: 42% of women employees have experienced some form of sexual harassment during their careers. But while based on the Australian market, Gallop noted those stats surely apply to the ad industry almost anywhere in the world.

In light of the women speaking up publicly against sexual harassment in Hollywood, Gallop recently called for women and men within the ad industry to start naming names. Anonymous stories have been running rampant for years. According to Gallop, women tend to empathize and men don’t give a shit. The only way to end the cycle is to break it open and put names to the actions. The results thus far? Gallop has found the scale, scope, and timeline of the problem horrifying. Holding companies and agencies have been buying silence for years. There’s sheer terror in speaking up because the men harassing are the gatekeepers to everyone else’s success.

If You’re Not At The Table, You’re On The Menu

Gallop remarked that on Day 1 of the conference, the “Daughters of the Evolution” panel featured Creative Director mothers and their daughters, speaking of sexual harassment as a fact. It’s sad but true. She pointed out that the biggest problem facing our industry, isn’t diversity, it’s sexual harassment because sexual harassment actively prevents equality and diversity & inclusion from ever happening.

Gallop then retold some of the stories she had heard, including one from many years ago about a young woman in a meeting at an ad agency with two of the most powerful and well-known names in our industry. She was the only woman among her male peers, when one of those two very powerful men said to her, “You really look like you need to get fucked.” (Trust me, it was even more shocking to hear in person.)

The Effects of Sexual Harassment

Gallop then broke down the effects of such a statement. In her words, when [harassers] do that [they] instantly dehumanize us. They strip us of all professional credibility. They reduce us to sexual objects and they ensure that all of the men around us will never look at us the same way again. They destroy our career path when they do that. And it prevents women from becoming the would-be leaders to welcome equality, diversity, and inclusion.

She encouraged everyone to read Bro Culture in Ad Agencies and the Impact on Women, a research study conducted in partnership with the 3% Conference in 2016. According to Gallop, it represents the single, best reasoning of why the industry is the way that it is. Advertising’s lack of relevancy to 90% of women can be traced back to how men literally see women in our industry.

And it’s everyone’s loss. Sexual harassment is the biggest business issue our industry faces. We have hemorrhaged huge amounts of female talent and we have lost the innovative, disruptive perspectives that would have reinvented the industry of the future. She even declared advertising’s lack of female leadership as a national emergency for our industry.

“When You Are Replaceable and He Will Never Be.”

Gallop went on to reference a recent article published in the The New York Times on October, 28, 2017. She shed also light on the fact that young people coming into the industry only have senior, powerful men available to mentor them. Unfortunately, the lack of women in leadership also creates an opportunity for men in power to use mentorship as a mask for sexual harassment and inappropriate sexual relationships. There simply aren’t enough experienced women in power to mentor their young counterparts. She urged the industry to make a serious investment in women and their ideas, so they don’t feel disposable anymore.

What can agencies do? Make every level and work environment at your agency gender equal, more female to male, as quickly as possible. Sexual harassment magically disappears when men are surrounded by women who they are forced to see as equals. They stop seeing women in one of two roles: girlfriend or secretary.

What can the rest of us do? Make an absolute shit-ton of money. We need to build our own businesses and financial ecosystems because the white, male one isn’t working for us.

At last year’s 3% Conference, Gallop encouraged the room to go out and start agencies. This year, she highlighted a few people who were inspired by her words and actually did it. She also encouraged everyone present to follow them, promote them and pay for what they’re selling. They include:

Gallop then brought the room back to the future by referencing a remark made the day before by Leela Ting (daughter of Chloe Gottlieb,) during the “Daughters of the Evolution” panel. When prompted, Leela had stated that she didn’t want to go into advertising because she wanted to work somewhere she could express herself creatively, spend time with her family, do something she loves and that connects to her soul. Gallop then urged us all to start our own agency of tomorrow, reinvent the future of advertising and create a place where Leela Ting would want to work. 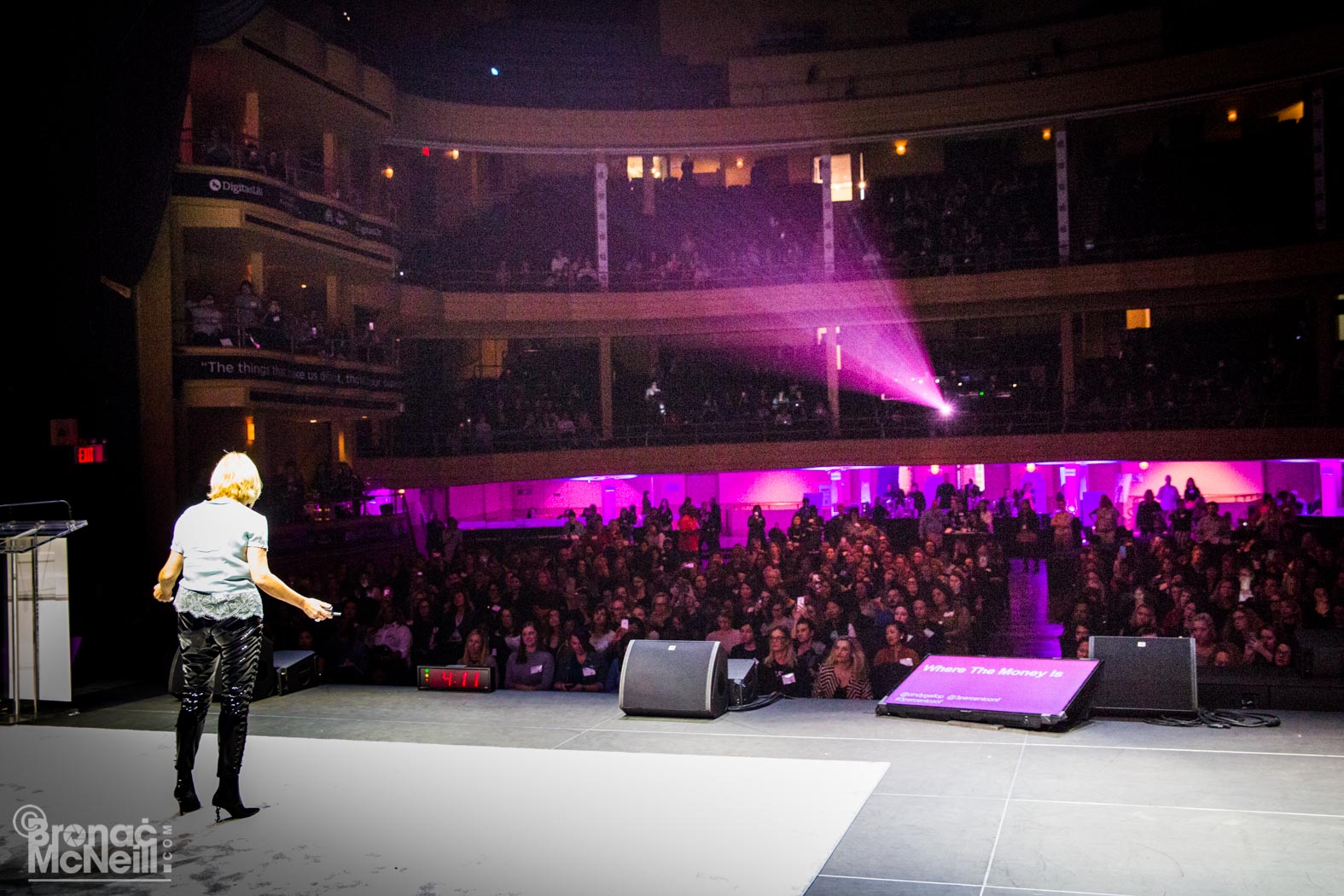 How To Invent The Agency of Tomorrow

Change your mindset. Consumers are conditioned to believe that advertising is bad and many tech firms see advertising as a necessary evil. But there’s an opportunity to shift the focus from making good advertising to making advertising good. If you love it, you can invent the advertising of the future and make it extraordinary.
Objective drives strategy. Set your business vision, objectives and goals expansively and then determine which technology can get you there. In other words, “blue sky it.” In five years, what would you love to happen? No matter how sci-fi or fantastical the idea, the technology already exists to achieve it (e.g. Ask Cindy Gallop on Facebook – the Cindy chat bot.)

Rebalance the power equation. Tech firms shouldn’t lead the conversation when it comes to advertising and tech. “Fuck that shit.” Move from collaborative competition to competitive collaboration. You can decide how you want to use technology, create your own future-forward advertising proposition, then take it to social platforms and they will pay you to license it and use it. And you can make money by licensing it to the industry, too.
Productize. The future is advertising products, not units. You can use your creativity to turn advertising into something extraordinary. You can create things of utility and value that surprise and delight consumers by the way they are delivered.

Your audience must be your team. Your team must look like your consumers. Diversity drives innovation and raises the “fucking bar.” The creative bar has been set low for decades by the white, male dominance that has held our industry in a state of stasis, while sexual harassment prevents the progression of female creatives and female leaders. We can raise the bar for the entire industry.

Gallop said The 3% Conference is the most creative, inventive, diverse, innovative conference in our entire industry, include Cannes Lions. She noted the conversations at the conference had been more courageous, more honest, more transparent and more creative than those happening anywhere else in the industry. It’s time to channel all of this into the ad industry of tomorrow.

We are at the next Mad Men moment in time, when many new forms of media are emerging. It’s our turn to see the creative opportunities, capitalize on them and run with them. It’s time to create an agency that Leela Ting wants to join. And Gallop implored those in the room to do it for all of us.

She said, “You can give us all the opportunities that we don’t get, that we’ve never had, that we are blocked from, that we are sexually harassed away from. You can be the foundation of an ad industry that is going to look more creative and more amazing than it ever has in history. And when you do that, you can make yourselves and all of us very, very rich in the process.” 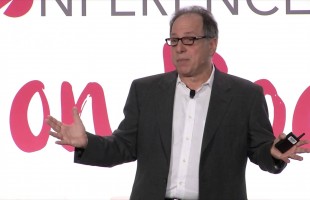 Men can – and should – support gender equality. Hear how, from one of the leading researchers and writers on men and masculinity in the world today 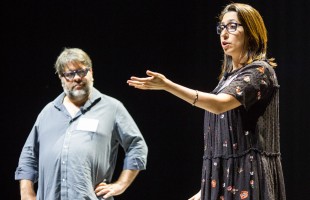 A recap of the 2017 3% Conference's Creative Director Track—master classes specifically tailored to those in creative director roles. 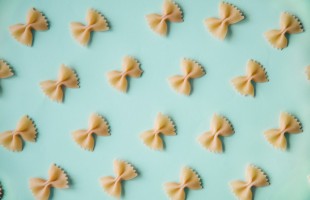 Are You Doing Diversity Right?

If you don’t have the right people on the team, you’re in danger of producing work that is both ego and ethnocentric.