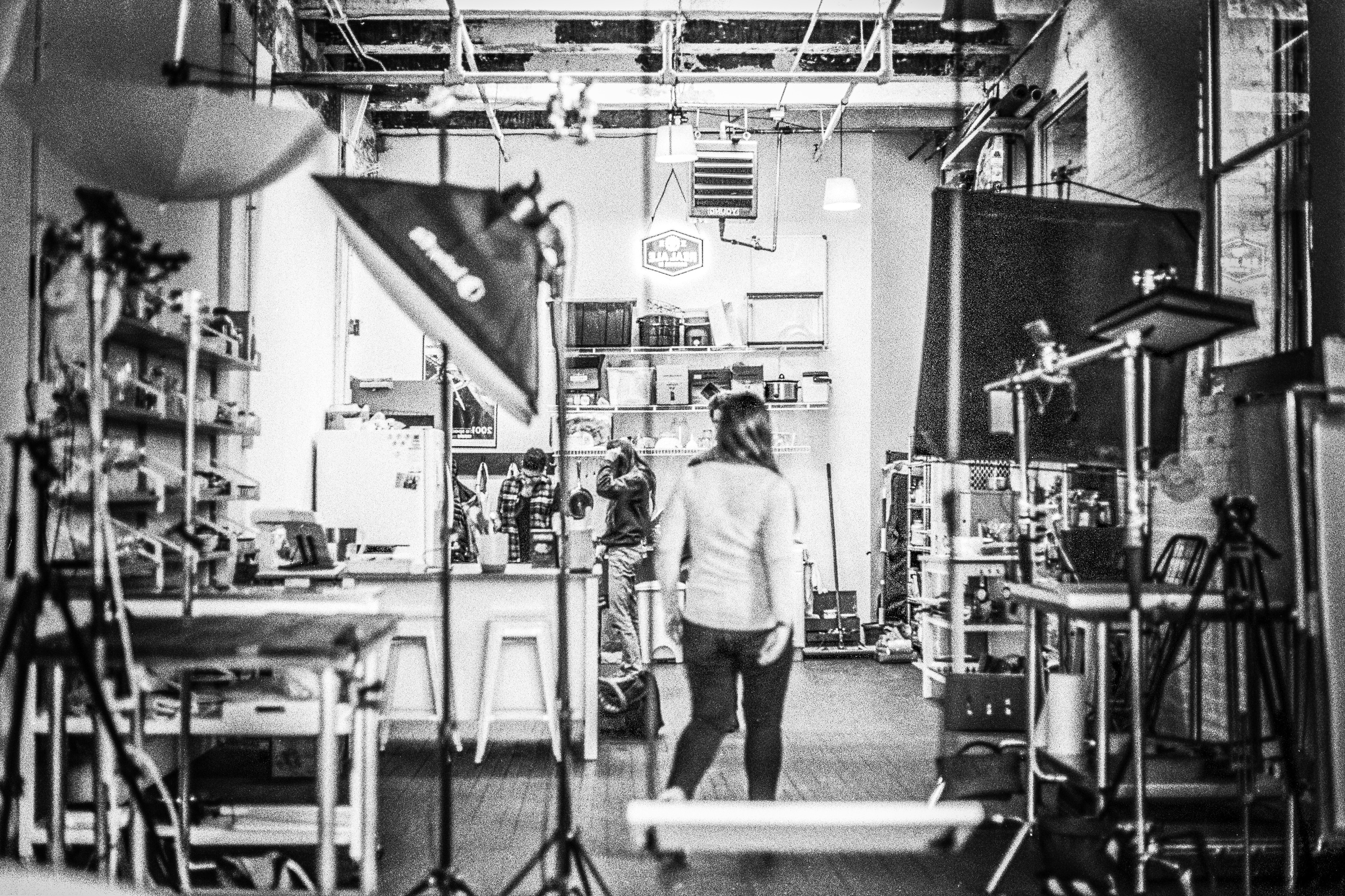 Becky Morrison is an award-winning film and TV producer based in New York. She kicked-off her career on the Hollywood blockbuster I AM LEGEND and went on to the world of animation on Disney’s THE WILD. She then took a break from features to produce the visual content for U2’s world tour. Since then she has produced over 200 commercials and promos for clients such as NBC, BET, A&E, and IFC. She owns The Light, a production company committed to elevating the production experience through equity, sustainability and innovation.

Like most other kids in film school, I dreamed about being a director. I wasn’t entirely sure what one did, but I knew it was what I wanted to be. “Director” was the coveted title, the one whose vision became reality. That dream ended when a professor told me I should explore producing, a career path better suited for women. I understood that what he said was sexist. I graduated from college in 2002, not 1952, but at the same time, I couldn’t refute him with facts. There were so few female directors back then. I knew to get to the top I was going to have to fight hard, and I didn’t have it in me. I didn’t want it that badly.

So I became a producer. Two decades later, a lot has changed. I’ve worked with more female directors and DPs in the past year than all other years of my career combined. But I’m concerned that the pipeline isn’t sustainable. These women are entering into the same system that always was, a world that is not only filled with men, but which is masculine by design. A process that was created for men by men.

If we want an industry with both women and men fully represented, then we will need to foster an environment where women can flourish. We will need to design an on-set experience where they can bring more than just their bodies, they can bring their full selves. Where femininity is welcomed alongside masculinity.

If we want equity, then we must understand how we got here in the first place, because it didn’t happen by accident. Women are absent from the film industry for a reason.

When Nickelodeons, the first movie theaters, opened in the early 1900’s they were instantly popular and the public grew concerned that masses of men were congregated together in dark theaters. Surely shady things would happen in the cover of darkness. The burgeoning movie business’s reputation was in jeopardy and at the same time, they were under siege by censors about the content of the films themselves. A problem to which women were the solution.

The prevailing ideology during the 19th century was that women’s piety and submissiveness made them morally superior to men, so a woman’s presence in Nickelodeons as both movie-goer or a theater-owner, had a cleansing influence. It was a double win: feminine vibes uplifted the industry while alleviating white middle-class concerns.

Business boomed. Motion pictures couldn’t be produced fast enough. It was such a new industry that nobody knew whether the work was best suited for men or women. It was ungendered, uncharted territory, and labor was scarce so the industry was happy to have both men and women churning out films while they waited to see which direction it went.

There were a lot of female filmmakers in the early days. Women directed 44 feature films between 1918-1922, whereas they only directed 58 of the top-grossing films between 2007-2018. That’s an average of 11 female-directed films per year 100 years ago, compared 5 major female-directed films per year now. Women were the heads of 20 production companies, the first talent agents, wrote hundreds of screenplays, and headed various departments within the studios. So ubiquitous was their presence that the Ladies Home Journal predicted that by 1925 “the feminine influence will be fully ‘fifty-fifty’ in ‘Studio Land’”.

That prophecy was unfulfilled. In fact, by 1925, five years after winning the right to vote, women were almost entirely eliminated from positions of power, not to return in significant numbers until the 1970s, the collateral damage of the success they helped to create.

What happened? Several factors contributed to the disappearance of women from Hollywood, some financial, others ideological. The first reason was a recession in 1921, which wiped out a slew of low-budget independent production companies where women held leadership roles. The companies that managed to survive, got real efficient, real quick.

Efficiency led to the second reason, specialization, the division of labor into roles which almost always involves sex-typing since it was very rare for men and women to do exactly the same job in the workplace.

The third reason was that Wall Street fell in love with Hollywood. Gone were the days when filmmaking was thought of as a less respectable form of theater. By the 1920s, 50 million people were going to the movies each week and it had become one of the most profitable industries in the US. Bankers bought stock in studios and to ensure their investments were safe, they sent their representatives out to sunny LA and their masculine work culture came right along with them. Big business associated professionalism with masculinity and bankers were not interested in seeing women in the board room. Out of all of the major studios, Virginia Van Upp at Columbia Pictures was the only woman producer working in the film industry from 1934-1952.

Another factor working against women was the rise of trade unions and their ideological emphasis on brotherhood. To the guilds, professionalism meant fraternalism, another flavor of masculinity that left no room for the female filmmaker. The ideal set was a masculine one, where men could work together side-by-side in the absence of “sensitive” women. In fact, “by the end of the silent era, The International Alliance of Theatrical Stage Employees and Moving Picture Operators felt it was necessary to declare that, if women attempted to “invade the projection room, it would exclude them by law.”

Today we live in a world where #TimesUp and #MeToo are awakening the public to Hollywood’s systemic abuse and gender imbalance. However, individual offenders are not the only problem: it is also baked into the structure and the fabric of filmmaking culture.

We have a 100 year legacy of a masculine cinematic system in which traditional female characteristics like being “emotional, nurturing, caring, intuitive and sensitive” have been suppressed and the hyper-masculine has been extolled.

This is not good for men either. An over-emphasis on traditionally masculine characteristics such as “working hard, self-reliance, aggressively and emotional repression” is toxic, preventing men from bringing their full selves to work too.

"The set of the future will put people first..."

What might the production of the future look like? How can we create an on-set experience that balances both the masculine and feminine, a space that welcomes non-binary crew members as well? It will take both innovating the structure and improving the culture. A culture that requires long hours, constant travel and personal sacrifice is not conducive to a balanced personal life, and thus not conducive to bringing one’s best self to work. The tech industry knows this; their flex-space modern offices don’t operate like a military ambush – they are not “shooting” with “the brotherhood” in the “trenches” (all phrases I have heard used in a matter of minutes onset).

The set of the future will put people first, recognizing their needs as human beings to be cared for and fulfilled both professionally and personally. We won’t feed them whatever is cheapest. We’ll be intentional about serving food that nourishes people, that is in sync with their personal dietary needs supporting their health and longevity. We will listen. We’ll invite feedback from the crew about how our productions can be improved and experiment with new methods. We’ll seek out areas where information is used to consolidate power and bring transparency to those areas, especially when it has to do with money. We’ll dismantle systematic interdepartmental antagonism and build relationships based on mutual benefit and trust.

Our productions will recognize our impact on the environment and implement measures not only to reduce waste but to prevent it from being created in the first place.  We will re-evaluate role specialization, and if the existing ones no longer work for this modern world we will create ones that do. We will create an environment where those who identify as men, women, neither or both feel comfortable expressing the fullness of who they are.