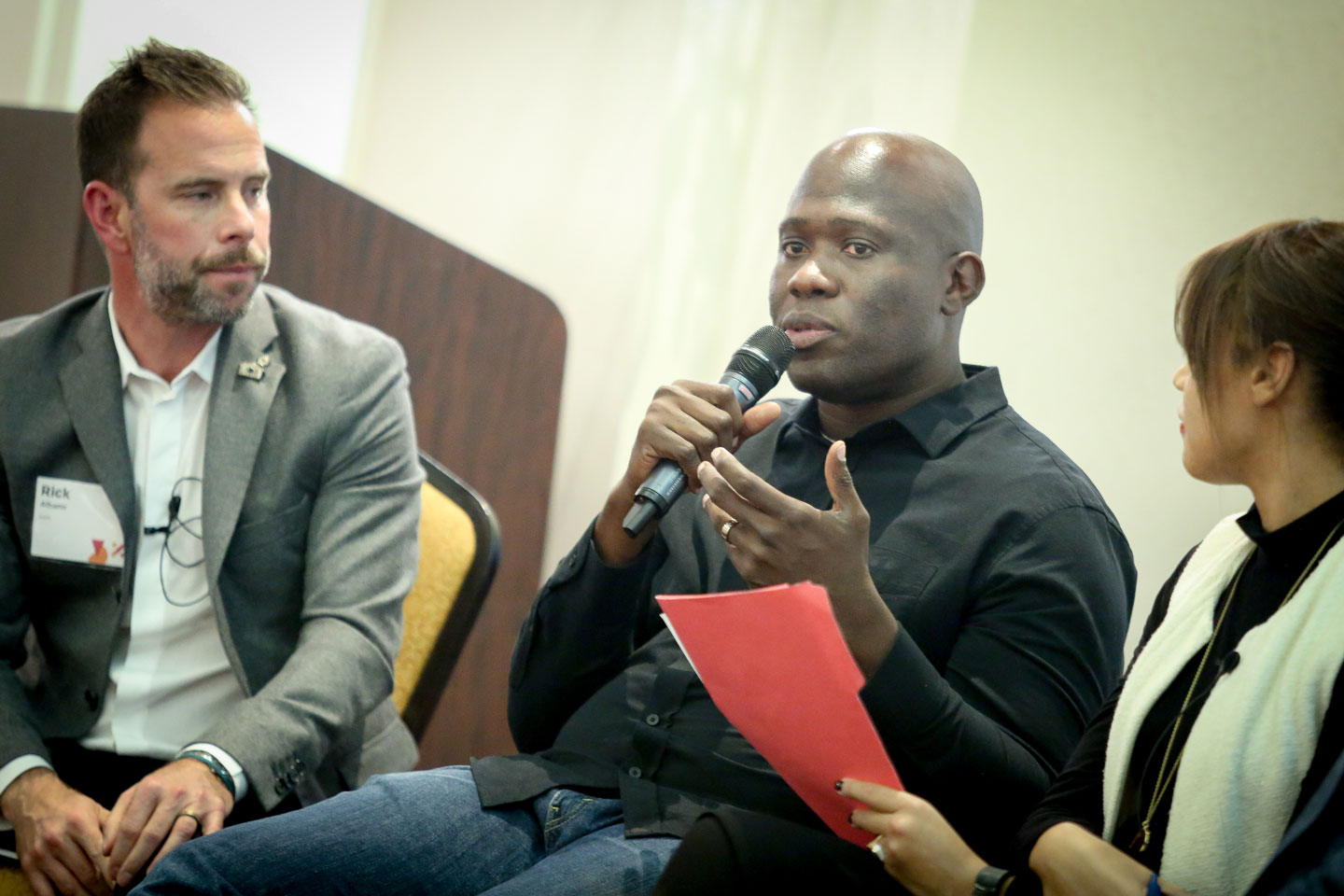 Imran Siddiquee is a writer, filmmaker, and activist working to transform how gender and race are represented in the media. He helped start The Representation Project, where he led nationwide campaigns to challenge hypermasculinity and call-out sexism in advertising, film, and television. He is an alumni of a Sundance Screenwriting Intensive, a winner of MTV’s Look Different Creator’s Challenge, and his writing on media has been published by The Atlantic, Buzzfeed, The Establishment, Salon, and Mic.

“When you say there are good men out there doing nothing, how long can they remain good men?.” That was the final line, at the final session, in the Manbassadors track at this year’s 3% Conference. It was a quote from Anita Hill, and was repeated on stage by Christena J. Pyle, Director of Diversity & Inclusion at Omnicom Group. Pyle’s challenge came at the end of a day which in many ways sought to highlight those men in the advertising industry who are trying to do something to transform their industry, and to enlighten other men on how they might join them.

Yet in the wake of the national conversation around sexual harassment and violence in the workplace, the choice to quote Hill - who famously spoke up about her own experience with harassment in 1991, only to be ignored and dismissed by those in power - reiterated a larger theme which ran through all of the sessions in this track; one which might provide a clear answer to any men still wondering how they can make their workplaces more inclusive, and safer, in 2017. Listen to - and believe in - women.

IT'S IN YOUR HANDS

Keith Reinhard has seen first-hand what happens when men step forward to mentor and champion women… or they don’t. It makes the difference between truly diverse and prosperous environments or agencies that stagnate.

The “Manbassadors” track began with a session led by DDB’s chairman emeritus Keith Reinhard, about how men in advertising could be better mentors to women, but its ultimate message was - rather than a litany of advice from Reinhard - that asking women what they need is the best way to figure that out.

IPG’s Michael Roth described him as an industry “legend” in his introduction, but Reinhard chose not to dwell too long on his own work history, but instead his speech was almost entirely filled with quotations from women reflecting on their experiences with mentorship. As Reinhard shared the stories of these women, he began to paint a larger picture of how men might approach being more thoughtful supporters of women, and all those who are most marginalized in workplaces.

Among the tips shared were requests from women for “organic” and authentic relationships with mentors, and a willingness to proactively engage mentees. One woman pointed out the difficulty which women of color may especially have in asking for mentors, and while she encouraged those women not to fear rejection, the implication was also that those in power - particularly white men - need to make themselves more available as mentors by reaching out first. The women Reinhard quoted also spoke about the impact of mentors who openly shared their failures, and weren’t afraid to be vulnerable as people in positions of power.

Perhaps most of all, Reinhard emphasized that the people he spoke to wanted to be heard, and understood. As one woman said, “Listening means not just hearing the words, but how they are said.”

Ad women shared how men’s support – and failure to support – have shaped their careers.

After Reinhard kicked the morning off by sharing the words of women, Session 2 in the Manbassadors track continued the trend by spotlighting two women and their firsthand experiences of working in an industry still dominated by people who don’t look like them. Michele Sileo, Partner & Chief Growth Officer at Eleven Inc., took the stage alongside God-Is Rivera, the Director of Inclusion and Cultural Resonance at VML, and moderator Matt Wallaert, a behavioral scientist at Swarthmore College.

The focus of the conversation was on how men had supported or not supported Sileo and Rivera throughout their careers, and Wallaert asked each to share personal stories which often veered powerfully into poignant moments of insight. Rivera, when asked about her first “negative” experience with men at work, reflected on how quickly it struck her that her path would be difficult: “I remember being a black woman, one of my first jobs out of college, and walking into the management office and it was all white men. I already knew I was outnumbered.” Meanwhile, Sileo, answering the same question, recalled a company trip to Las Vegas as a 28-year-old, and how she was told by a supervisor, who was a man, that she couldn’t accompany her co-workers to a late night event. It turned out the men on her team were headed to a strip club.

Just as both women pointed to these subtle ways in which they had been made to feel left out, they also spoke about the small ways in which men had shown up for them in and out of the workplace. Sileo pointed to another early supervisor who not only made sure she had an opportunity to sit in on meetings, but also asked for her opinion - letting her know that her voice mattered even as a young woman. Rivera was especially passionate about acknowledging how her husband had stepped up at home - everything from doing the dishes to cooking the meals - in ways which made it possible for her to succeed at work. She emphasized that one of the best ways men can help shift opportunities for women, at home or at work, is to not “fall into what society tells you you are supposed to be doing.”

Wallaert asked both women to share some final thoughts on how men could do more, and here are some highlights from their recommendations:

Talk to other men about not falling into gender roles, and do so before they take a position of influence. Especially speak up and challenge men who are exhibiting demeaning behavior towards others. Rivera used the accusations against Harvey Weinstein as an example: “If you look at what’s happening in Hollywood, and you have to think how many people didn’t say anything or turned away. The courageous men can speak up and interrupt other men: they may make for an awkward moment in the locker room, but this is what it takes to dismantle [systems].”

Both women spoke about putting women forward for positions and empowering them to lead. Sileo emphasized the value of mentorship, echoing Reinhard’s earlier presentation, and the importance of men understanding their outsized influence in the workplace. Rivera spoke at length about why agencies should think in terms of power, including at the intersection of race and gender: “Even before we get to the programmatic stuff, we have to sit and look at who at your agency has power? Who are the women in the room that have that? Not only listen and nurture, but give them the power and space they deserve to really lead.”

Sileo encouraged men to put themselves in the shoes of women and Rivera’s final thoughts were even more direct:

“Listen, if you’re in a system that is benefiting you, you must understand what it is doing to those who it is not benefitting. You need to work twice as hard - as men - to understand how it is that we can level this playing field...It’s not on the oppressed to fix this, it’s on the oppressors. We need to do a little bit more to kick our men into high gear, and that does start young. It’s going to take a long time to dismantle something that people just know and follow by instinct.”

What happens when mom has the big job and dad stays home with the kids? You have The Big Flip. Over 18 months and five cities, this timely documentary follows four American families as they navigate the trials and triumphs of at-home fatherhood and mothers as main breadwinners.

Over lunch, there was a special screening of Izzy Chan’s documentary film, The Big Flip, which looks at the increase in women breadwinners and stay-at-home dads in the U.S. - and the challenges and possibilities it brings up - through the experiences of four heteronormative families. Following God-Is Rivera’s moving story about her own husband stepping up at home, it was a powerful and thought-provoking look at the changing landscape of family life in America.

After the screening, there was a brief conversation with Chan alongside one of the mothers featured in the documentary. Chan shared that in the process of making and financing The Big Flip, she and her husband had to flip roles themselves and that the most significant thing she had to learn was to let go of the idea that there is one “perfect” solution. 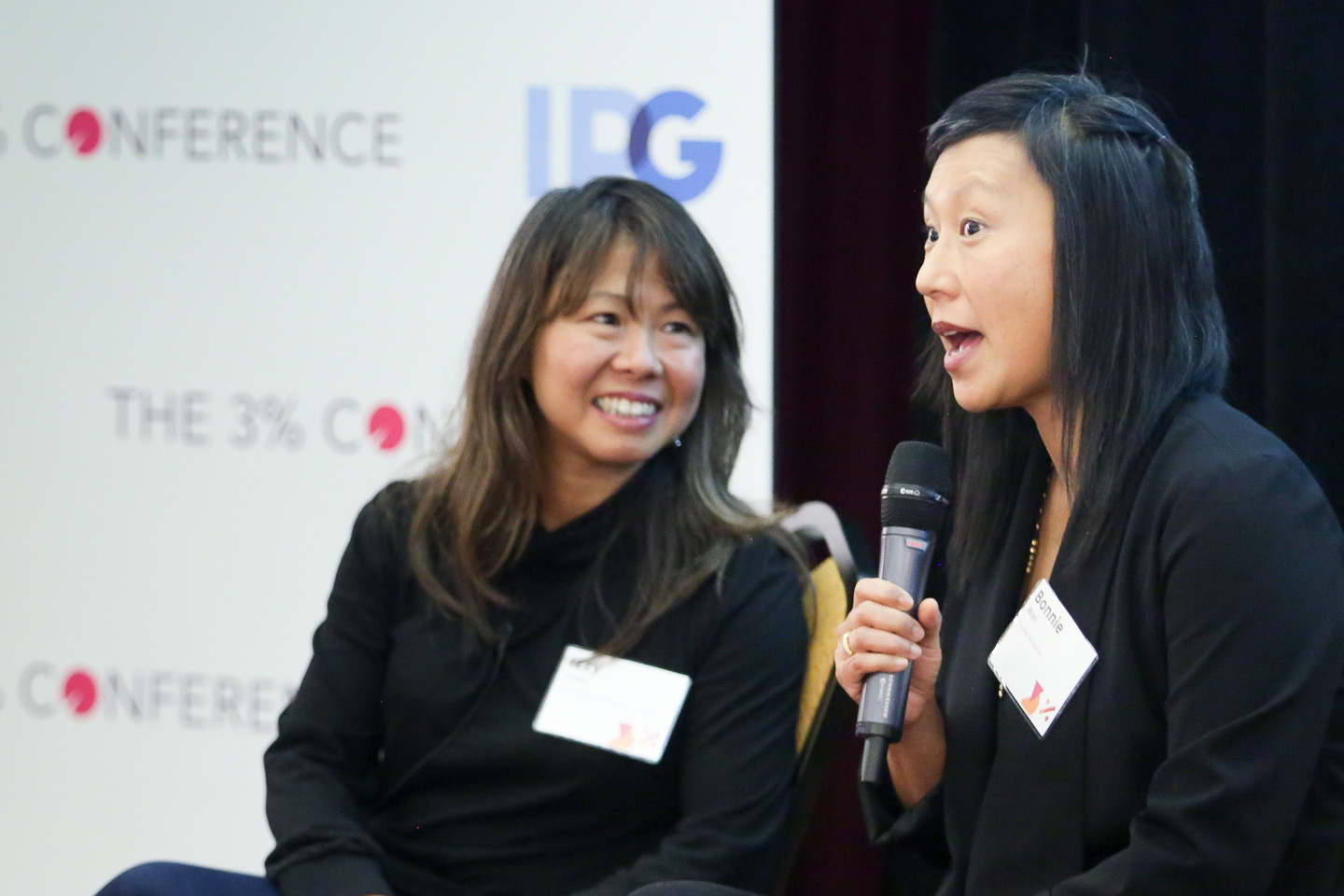 Glenn E. Singleton has devoted over 30 years to constructing racial equity worldwide and developing leaders to do the same. His “Courageous Conversations” approach can be transformative inside agencies.

A real highlight of the day was Glenn Singleton’s stirring, interactive presentation on how to confront issues of inclusion at work, particularly around race and gender. Singleton began with the idea that “race matters,” but by providing a framework for talking about race he helped illuminate the ways in which it intersects with every other aspect of life, emphasizing that “you cannot deal with gender disparity without dealing with race.”

Before Singleton began, he was introduced by Wieden+Kennedy’s director of client confidentiality Scott Kleiner, who shared how he was challenged by his wife to face his own internalized racism. This subsequently led him to Singleton, the president and founder of Pacific Educational Group, who worked with Kleiner to convince hundreds of employees at Wieden+Kennedy to go through a 2-day immersive program of “Courageous Conversations.”

The Manbassadors track concluded with a moderated panel of four men spearheading efforts that go beyond lip service and are generating real results to increase diversity at their agencies.

Each of the men shared unique initiatives and ideas which they had implemented to drive gender equity and inclusive work environments. Passey, for instance, spoke about a company-wide equal pay campaign that had all employees leave work at the same time, 3:24 p.m., to show solidarity with women who on average are paid 80% of what men are paid. Meanwhile, Albano shared a strategy of building informal networks with women and people of color who are potential candidates at Swift, long before there are any job openings. He described how this made it much easier to maintain or increase diversity even when hiring last minute or in urgent situations.

The panelists were also challenged to make commitments for the year ahead, and Albano shared a goal of hiring more people of color into leadership roles while Amoo-Gottfried pledged that Facebook would return as an official sponsor of The 3% Conference in 2018.

Though it was reassuring to hear from men - especially some men of color - thinking about innovative ways to bring more women into their organizations, they each emphasized that there was much work to do. And as God-is Rivera said earlier, these men in positions of influence may need to do twice the work to make sure the shift they seek actually includes all people. But again, Pyle’s choice to close with some words from Anita Hill contained its own answer to many of the day’s challenges: Change always requires hearing and centering the voices of women - especially women of color. 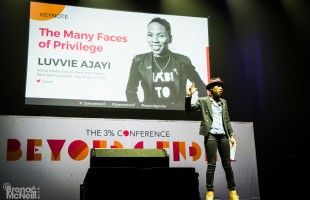 Let’s kick off our BEYOND GENDER theme by considering one of the most misunderstood words today: “privilege.” Defining it fully can be a defining moment. 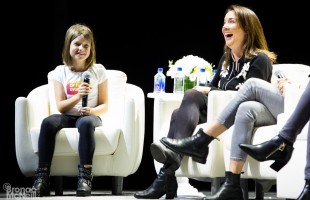 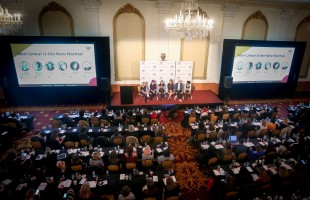 A recap of the 2017 3% Conference's Leadership Track—master classes specifically tailored to those in leadership roles.