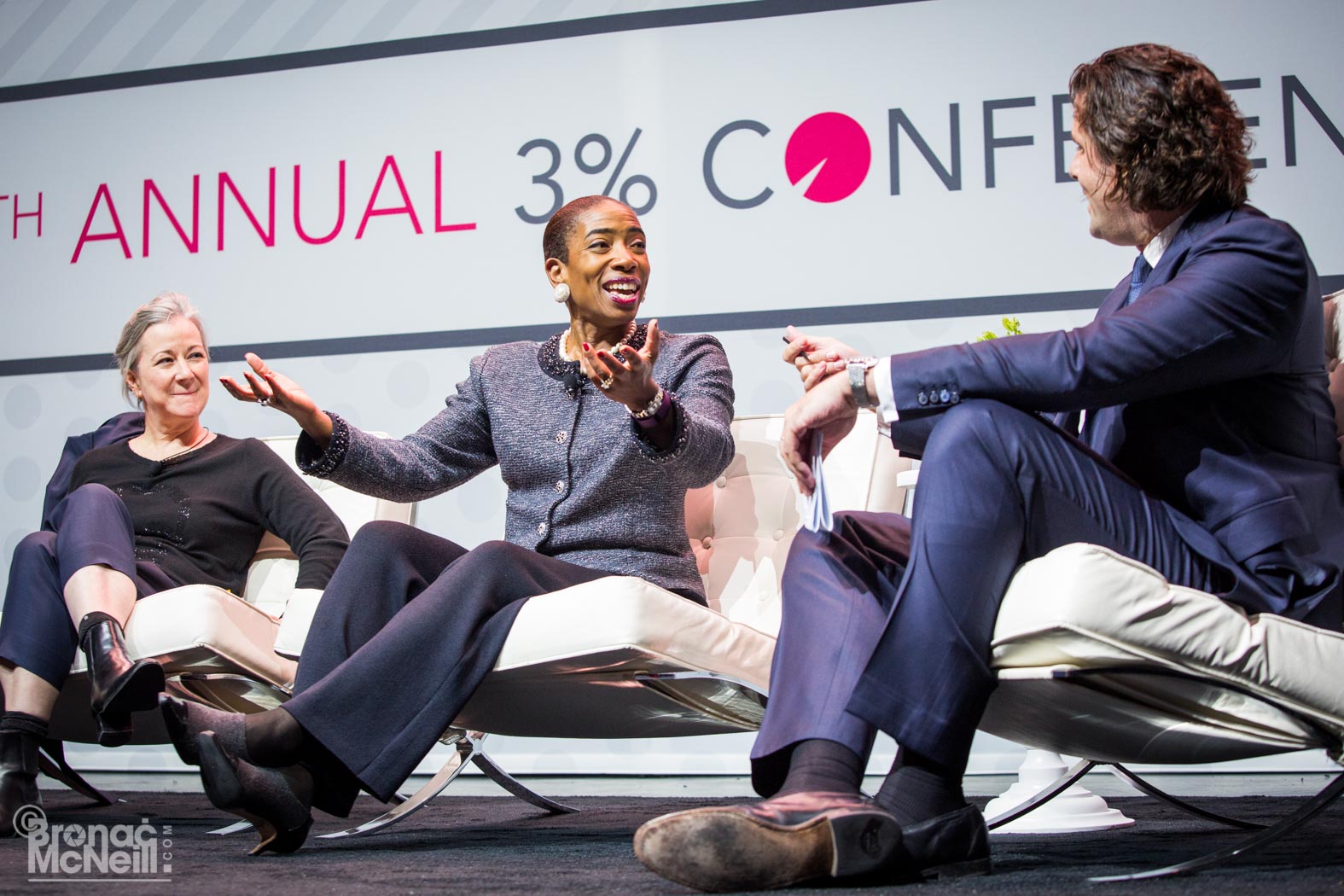 Kate Kemp is currently the group creative director at HackerAgency in Seattle. Previously, she worked in the digital, promotional, shopper, and experiential realms at agencies in Dallas, Texas, and New York. Her client roster includes Microsoft, Amazon, Heineken USA, Starbucks, PepsiCo, and Olay. Her editorial work has appeared in publications including Fast Company, Forbes, Campaign US, Monster.com, Femme Fatales, and Geek Monthly.

The women who’ve made it to the very top have had quite a journey… and not all the roads were paved. Hear the unvarnished truth about their triumphs and setbacks, plus who keeps them inspired when the going gets tough. Moderator: Carter Murray, Worldwide CEO, FCB. Speakers: Colleen DeCourcy, Global Chief Creative Officer, Wieden+Kennedy; Carla Harris, Vice Chairman/Managing Director, Morgan Stanley; and Lori Senecal, Global CEO, CP+B. Sponsored by Morgan Stanley.

There are certain moments in time you know you’ll remember forever. Moments in which you and the people you’re with are completely present, connected, and pulsing from an energy that pumps from every soul into every cell of every body in the room. Those of us lucky enough to attend the Sheroes panel on November 4th at Manhattan Center in New York City shared this moment and walked away with five powerful pieces of advice that apply to both men and women in any industry.

When asked by moderator and Worldwide CEO of FCB, Carter Murray, to share the one piece of advice she wished she could teach all the attendees in the room, Carla Harris, VP/Managing Director at Morgan Stanley delivered an answer so astute, a co-panelist joked that the session was over.

According to Harris, the one thing people should understand is the concept around performance and relationship currency. “Performance currency is worth…about a buck-and-a-half,” she explained. And it’s earned by delivering that which was asked of you, plus a little bit extra. It works the same way as the stock market; any time a company says they’ll deliver 25 cents a share but delivers 40 cents a share, that stock goes up and, when you over-deliver in the workplace, so will yours.

Although it can serve you well early in your career, establishing your reputation, getting you raises and even attracting a sponsor who goes to bat for your promotions behind closed doors, Harris warned that performance currency, over time, experiences diminishing marginal returns.

Suddenly, “That buck-fifty starts to work its way right down to a dollar. Why? Because now you have created a new standard of excellence,” Harris explained. “Everybody knows that you will always deliver. So there’s no longer any premium associated with your deliverable. Now the currency that becomes more important is the relationship currency. And relationship currency is worth about $2.25.”

In order to advance in the workplace, you must invest in relationships, inspiring leaders to support you and teammates to follow you. If you consistently pull all-nighters, skipping those invaluable chances to bond with colleagues on a human level, your career path will eventually plateau. “Performance currency may get your name on the short list,” Harris said, “But if no one can speak on your behalf, they’ll simply go to the next name. Relationship currency will make it happen.”

It’s important to not only view relationships in the workplace as a way to quickly climb the corporate ladder. Developing and maintaining a true support network is critical to maintaining strength and sanity in an incredibly competitive—and often disheartening—environment. Murray pointed out that, the higher you ascend in your career, the more you have to manage. And that management extends beyond clients and people and into dealing with what’s said about you in the press.

Soon after being appointed to his role as the Worldwide CEO of FCB, Murray saw comments comparing him to a “fat Phil Nicholson” and read that he’d likely only survive in the position 6 months. Just a week prior to the conference, Lori Senecal, Global CEO of CP+B, read that she was “charm-free, steely and heartless.” Even in high school, Carla Harris had to shake off her guidance counselor’s advice to not bother applying for college.

It’s a good thing for us these three were able to turn to their support networks and ignore the haters. Murray is now in his third year as Worldwide CEO, Senecal proved she was a Shero to a full house at Manhattan Center, and Harris got accepted to Harvard, Princeton, and Yale.

“Your responsibility as the leader is to create and inspire the company and really to build a bright future for these people,” said Senecal. “In return, when you have those difficult moments it’s amazing to see those people rise up and say, ‘I’ve got your back. We all love you. We believe in you. Don’t pay attention to those things.’ The team that you’re leading and trying to create a bright future for are the same people that lift you up.”

One of the best ways to build a support network is by being your true self. Something it’s taken Colleen DeCourcy, Global CCO at Wieden+Kennedy, half of her career to truly embrace: “I probably made it up the first half of the ladder by being as much like the boys as I could … as tough as I could,” she explained. “And now I think I’m going up the second half by being myself.”

DeCourcy admitted she was her own worst enemy, always feeling slightly insecure and believing that only two things (hard work and luck) had gotten her to where she was. She told stories of working ridiculous hours and getting stuck in perfectionism to the point of paralysis. But, as she ascended up the ladder, she realized she had to get out of the weeds, trust her own instincts and consult with her support network to remain successful. And sometimes that means being okay with imperfection.

“Following my instincts and saying ‘I can be wrong sometimes’…gives me back…space,” DeCourcy said, smiling. “Empty spaces where there’s nothing in it but my own thoughts. And that’s a gift.”

4. DEFINE YOUR OWN WORK/LIFE BALANCE

The question has always irritated me as it never seems to be one asked of men. Harris helped me understand another reason it makes me prickle: “Popular business press likes to say work/life balance,” she pointed out. “But what they’re really writing about is work/FAMILY balance. And it’s not just your family that creates your life.”

Life comes from different places for different people. Some find it through mentoring. Others get it from exercise. Harris admitted she’ll sometimes intentionally get stuck in traffic knowing it’ll give her extra time to rehearse for an upcoming concert. Senecal spoke about throwing herself into new business pitches when she knows the return on passion will be worth the late nights and post-pitch hangover.

Regardless of how you define “life” in the work/life balance equation, the most important part is recognizing that this definition can change and taking the time to check in with yourself to see if you truly know what it is for you.

Although The 3% Conference has helped increase the number of women leaders from three to 11% over the past five years, we still have a long way to go. The industry is still dominated by men. And, while some of them are beginning to understand the need to empower, mentor and support women, the default approach tends to focus on the negatives and the past, rather than the positives and the possibilities. Murray explained the shift in his own perception:

“One of the privileges of being a global CEO is that I’ve been exposed to peoples' stories and seen some of the things that are wrong in our industry that we need to fix,” Murray said. “I really do believe that it can’t be done just in conferences like this. I think that white, heterosexual males who still dominate our industry in management…have to be honest that there is a problem—especially in management—and we have to fix it. It’s not complicated…People have their heads buried in the sand when they say that things are fixed when they clearly aren’t.” In what he calls “typical fashion” he was arguing with Susan Credle, “and she said ‘Carter, maybe. But what we really need to do is celebrate the women who…despite that, have made it to the top. We need to learn from them, take inspiration from them…I don’t want to talk about the negatives.’ And that’s why…I realized, that, as usual, dammit, Susan was right.”

With empowerment coursing through our veins, the entire room had no choice but to shoot up out of our seats in a standing ovation, with shouts and applause. Now it’s time for each of us to answer the question and theme of the conference: “What are you going to do about it?” 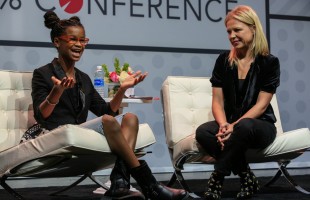 Fireside Chat: What Are You Gonna Do About It?

What are you gonna do about it? Marley Dias, founder of the #1000BlackGirlBooks movement, has a story so inspiring that Kat Gordon based the theme of the 2016 3% Conference on it. 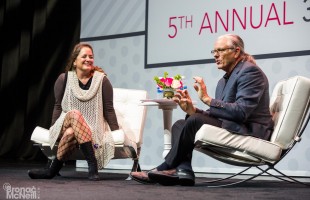 The 2016 3% Conference Creative Director track emphasized that we need engagement from CD leadership like never before if we're to achieve equality. Recap by Deanna Paquette. 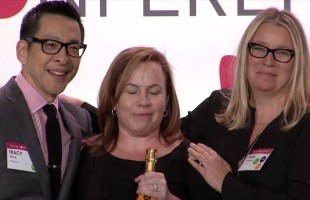