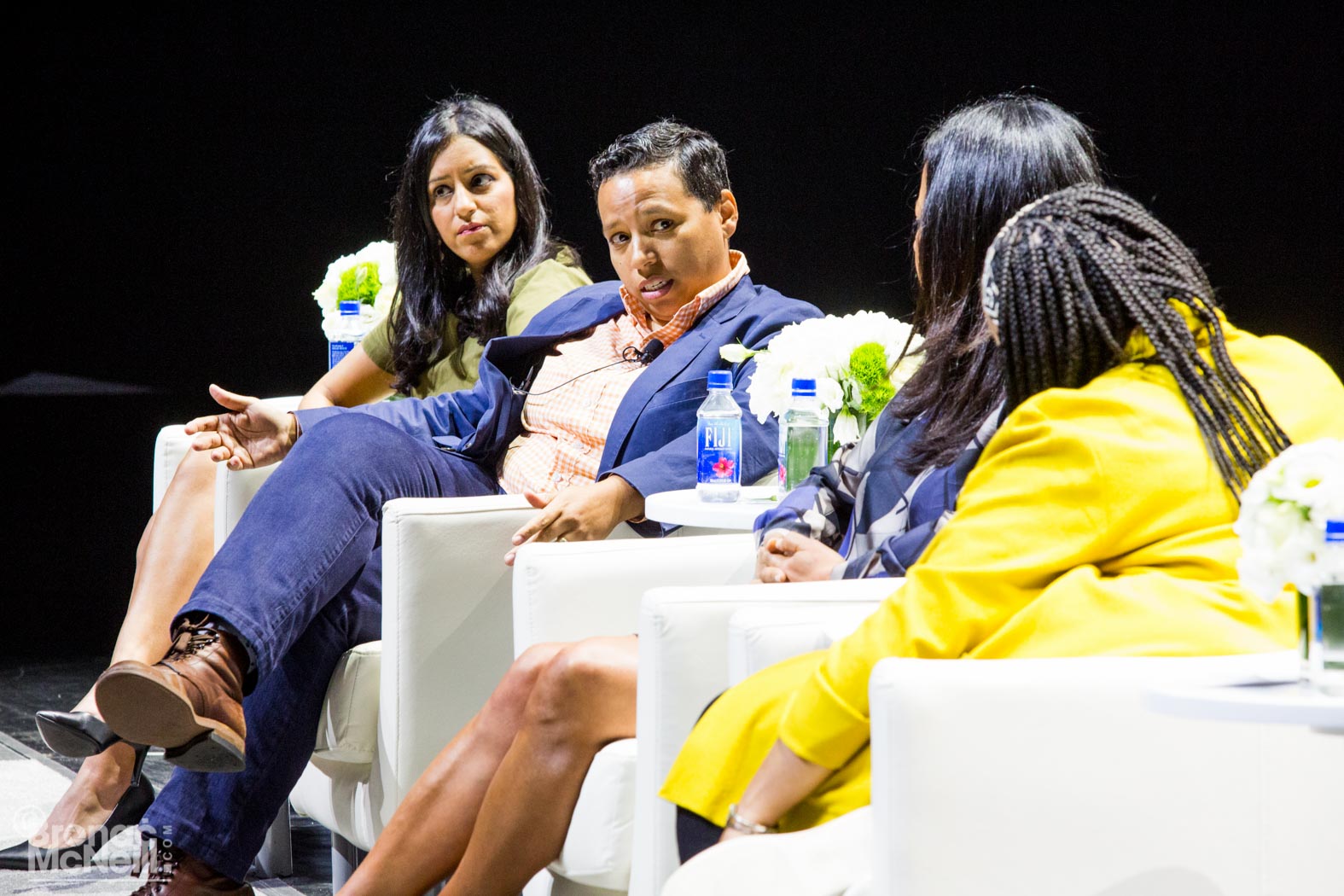 Catherine Eccardt is a senior copywriter and SVA alum who’s been working in the ad industry for 10 years. After years of being the go-to scratch track voice at multiple agencies, she is now also pursuing a career in commercial voice-over work. As a native NYC-er, she prides herself on her ability to navigate the subway, imitate a Queens accent, and know what a bagel should taste like.

Media is changing, in who makes it, how it’s consumed, and how it shapes our understanding of the world around us. In a year of unprecedented political and societal shifts, we heard from women on the front lines of the headlines.

The 6th annual 3% Conference declared that this year, we go Beyond Gender. And the Rethinking Media panel truly lived up to that statement.

The panel was moderated by Judy Jackson, Global Chief Talent Officer of Wunderman, and she immediately began with a shout out to Kat Gordan, thanking her for delivering on her promise for more diversity at the conference this year.

She then turned the topic over to Lydia Polgreen, Editor-in-Chief of HuffPost. Polgreen called out the lack of representation of diversity in media and questioned if you can always be unbiased when reporting a story. Polgreen explained that she approaches her work as an honest journalist, but she can’t disown her African heritage or her sexual orientation any more than a white or straight person could because “We all bring our stories and experiences to everything we do.” She encouraged that we should all bring our whole selves and if we don’t, the right questions won’t be asked.

Jackson then turned to Michelle Ebanks, President of Essence Communications Inc., asking her about how Essence has adjusted and changed since it went from being African American owned to being owned by Time Inc., and if the way women of color are portrayed has changed over the years.

Ebanks confidently responded that nothing has changed in any fashion, citing a journalistic integrity that is continuously upheld, and that “No one has ever said don’t tell this story or have this perspective.” She explained that Essence embraces diversity and always shows different skin tones, hair textures, and body types, with no hierarchy or stereotypes, it’s truly a celebration of all women.

At that point, Sabrina Siddiqui, political reporter for The Guardian, joined the conversation, telling a story about an op-ed piece she wrote after the election was over. She recalled that there was a point where Ben Carson said that a Muslim person shouldn’t be president because their values are not compatible with the constitution. To Siddiqui, she was so used to the rhetoric that it was just another sound bite. But she thought differently about it after she went to a family party, where her seven-year-old niece–a quintessential American girl–said, “I saw you on TV. Is it true that someone said we can’t be president?” 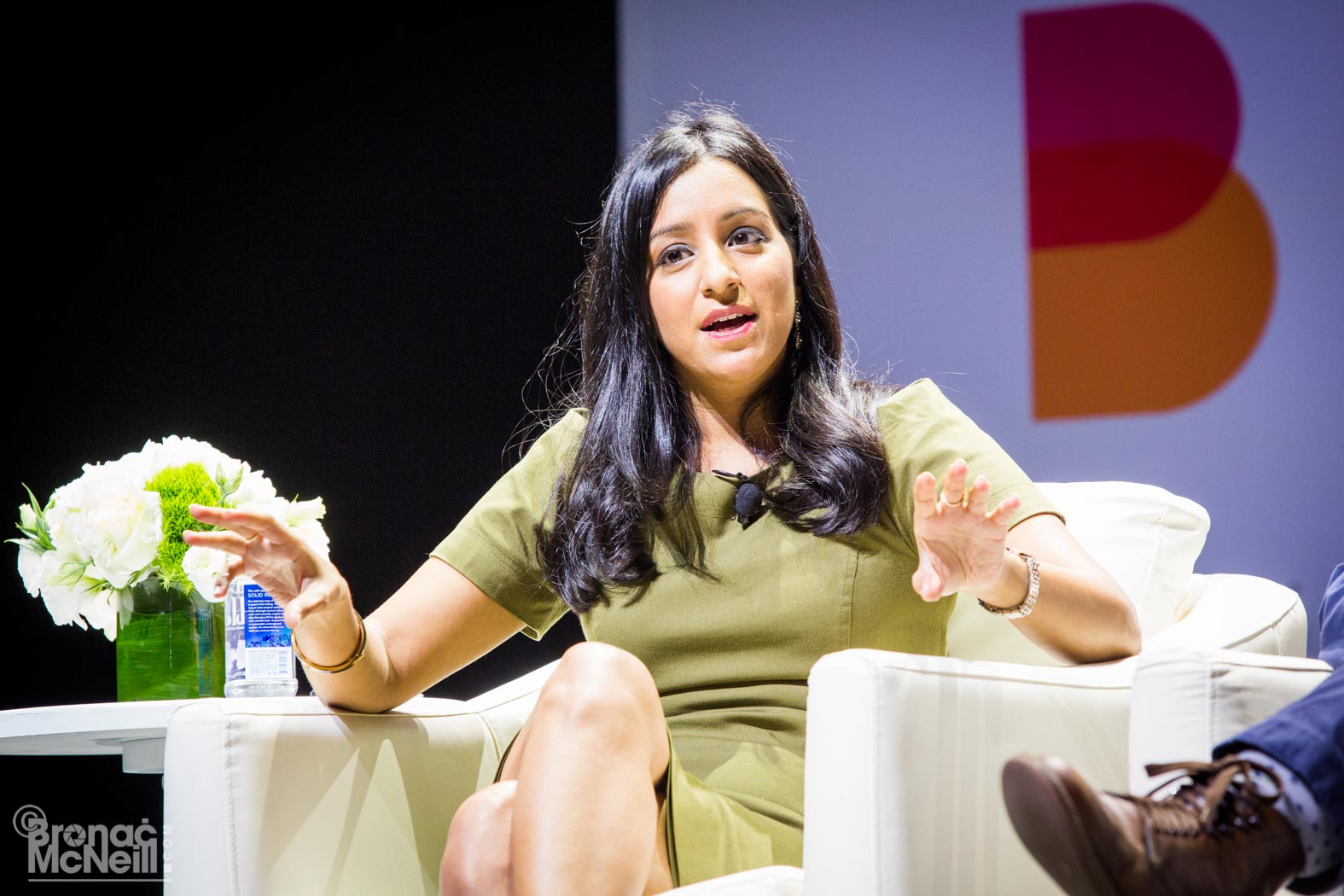 Siddiqui was struck by the fact that she said “we.” It was probably the first time her niece was realizing there’s something different about her. At that moment, Siddiqui felt she wanted to write about it, adding that it’s not about being biased, but about having the ability to educate.

Polgreen chimed in, stating that we’re living in a moment where subtext has become text. Significant barriers, like growing up thinking it would be hard for a Muslim to become president, have now suddenly been made plain. And we’re seeing it and confronting it now. She said it’s a remarkable moment where all of us are simultaneously horrified but relieved that we can talk about it openly.

Jackson then asked Polgreen if she can be more honest now that she’s not with The Times.  Polgreen responded with a firm "no," and added that she believes that Times journalists are now bringing more of themselves into their work, and that “Personal is fair game now and it’s impossible to think that any journalist can leave their identity at the door.”

Jackson then asked the panel if they thought the way women of color are portrayed has changed for the better or if we’ve regressed.

Ebanks answered first, stating that she believes there have been more positive changes, but we’re not all the way there yet. She added, “93% of women of African descent felt media did ok to poor job reflecting how they see themselves. We see ourselves better than how we are portrayed.”

Polgreen built on her response, adding that culture is further ahead than politics, that it gets the public ready for change, and that “…we’re amidst an exciting moment of inclusivity and representation and it’s preparing us as a nation for a real revolution in policy and politics.”

Jackson then turned to the audience for questions. The panel was asked how they present their whole selves and ensure that they’re authentic.

Ebanks answered first, recalling a meeting she was in yesterday. Out of the 200 people in the room, she was the only woman of African descent. She continued, “It can deplete a person, but coming to conferences like the 3% Conference and making connections with the right people reminds you that what you’re doing is important.”

Polgreen explained a small thing she always tries to do in meetings. When she notices that someone hasn’t said something yet, she gives them the space to speak up. She was nurtured early in her career and she tries to pass it on, to help ensure that everyone feels comfortable contributing their opinion.

Siddiqui added that women should know that they have a voice and shouldn’t be afraid to use it. It can take time to build up confidence, but it’s the work place’s responsibility to listen and accept people and address their concerns.

In closing, the panelists were asked for a call to action, to give the audience some words of wisdom and what they think we should do after leaving this conference.

Polgreen asked the audience to seize the moment. Powerful people and institutions are being called into question in ways they never have before and this is our time. She added that shame is the tool of the patriarchy and women should, “…abandon shame and know your rights.”

Ebanks echoed Polgreen, saying that tools of the hierarchy have chipped away at our confidence, and her call to action was to step out of it and be confident.

Sabrina’s call to action was to, “Know that we are the change.” A woman’s march one day after the inauguration isn’t enough and if we want change, we need to stay engaged and be part of the political process. She added that a unified voice is much stronger and we should be more energized and mobilized.

The audience rose to their feet, cheering and clapping. It felt electric. The hope and excitement in the room were palpable. Ending the panel with a call to action was incredibly refreshing and empowering, and left us all with an inspirational feeling that we actually can help make a difference, no matter who we are.

Keynote: Life is a Playground

Kyle Cease opened Day 2 of The 3% Conference with a keynote aimed to have the audience rethink everything and everyone in their orbit...for better. 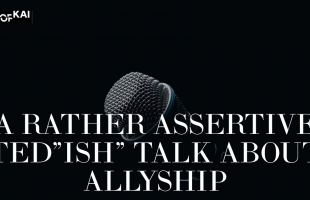 A Rather Assertive Ted”ish” Talk About Allyship

We do not need any more talking heads.