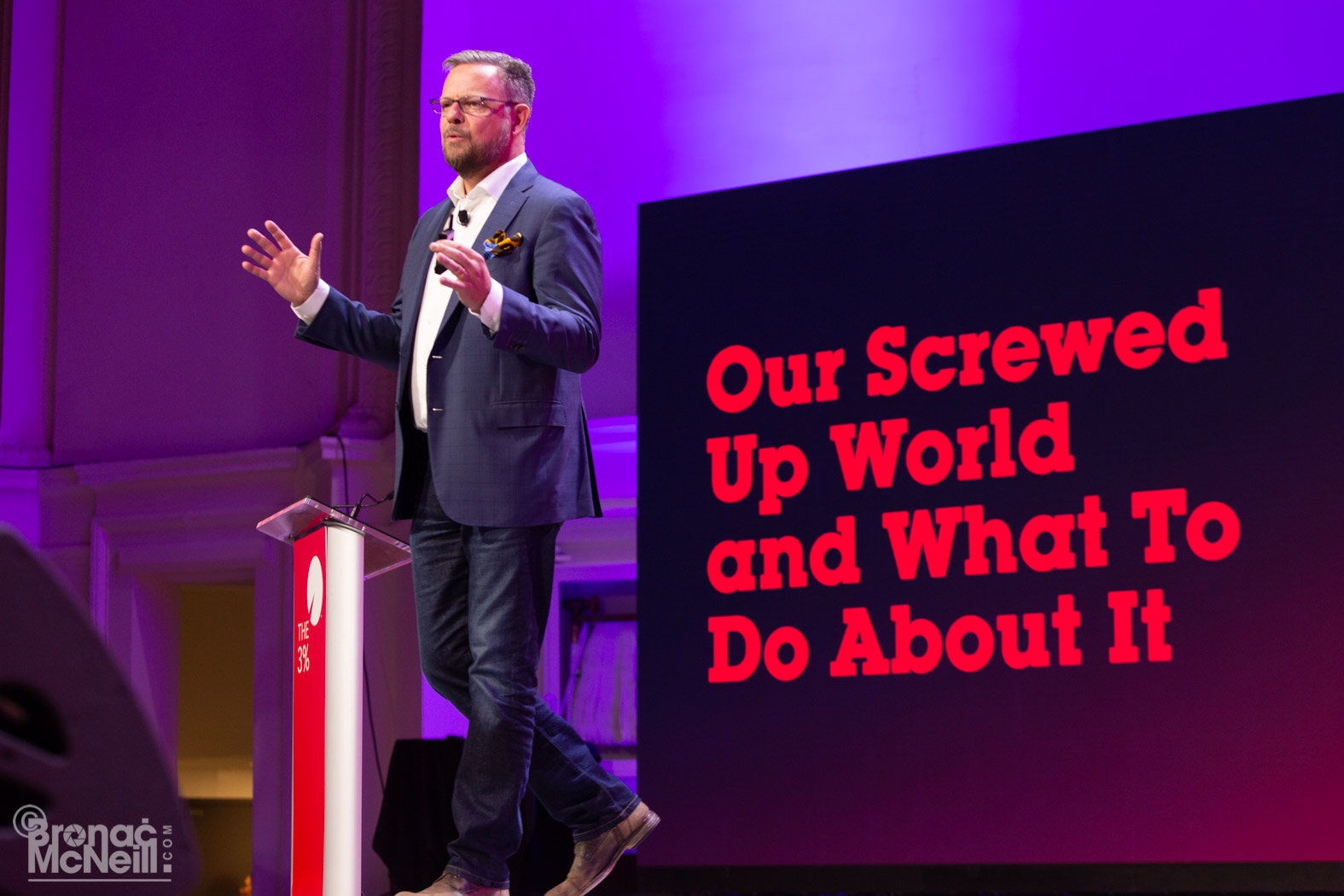 Our Screwed up World & What to Do About It: An (Un)Expected Lecture from a White Man

Against my better judgement -- because I might actually want to work for Mr. Venables one day -- I have to admit that upon reading that a middle-aged white man was to be a keynote speaker at The 3% Conference, with a speech about how he knew how to save the world no less, I had my doubts. I’ve spent a lot of my life listening to men and I hadn’t flown 2,000 miles from California to Chicago to attend a conference about women to listen to another one.

But thankfully, Mr. Venables was delightfully self-aware of the fact that there might be a small, angry, woman of color like myself in the audience, and that she might be writing a blog about him, and so he came prepared.

“Now I know what you’re thinking,” he mused as the applause and catchy jazz intro music died down, “what is this white man doing here?”

In order to foster some goodwill between the audience and himself, he introduced us to his two daughters, who, via some cute cell phone videos, both explained to us exactly who Paul Venables was, and why the hell he was qualified to talk to us about saving the world.

It was also then that I learned that Paul Venables just might be worth listening to. It took his eldest daughter Paula to convince me, but this quote struck me:

“I guess that my dad is a genius of sorts because he values people above all else.”

And though that idea shouldn’t sound radical, it totally is. Because in my two short years in this industry, I’ve found that valuing people is a rare attribute, especially when those people have their names on companies.

(It also struck me because any daughter calling her dad a genius in any capacity is bold. But I digress.)

After the daughters introduced us to their father, it was time for the man himself to speak. And believe me when I say, the room was absolutely silent when he began:

“Here’s a fact,” he announced confidently to a full ballroom, “the world is screwed up.”

A title drop that slick? Damn. This man really does work in advertising. 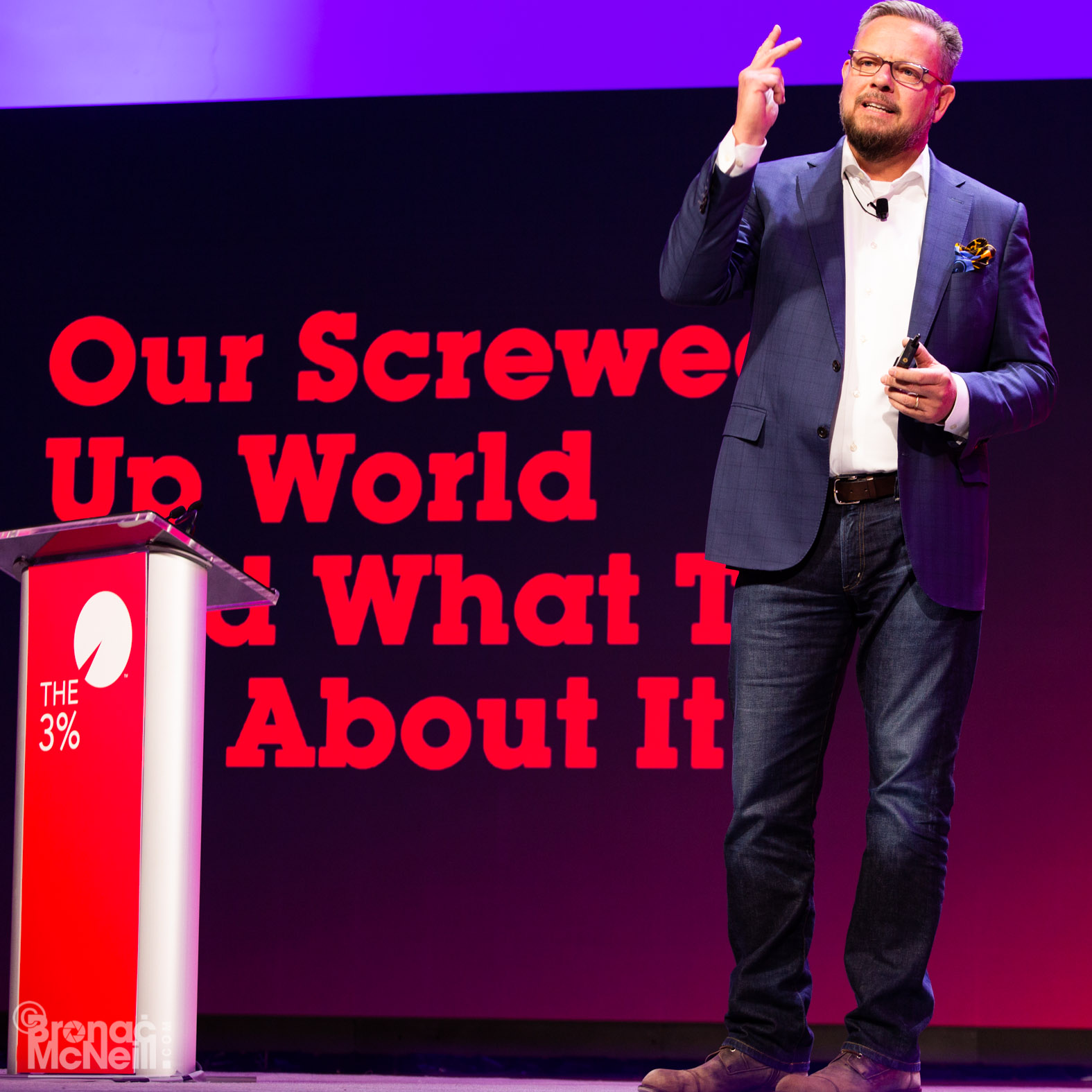 The world is screwed up, says Paul Venables, because the world is a very divided place.

According to Venables, there is a lot of hate being thrown around in this world, which is bad enough. But then, to add insult to injury, people (on both sides) seem to really be enjoying the hate that’s going around.

And if we really want the world to be better, like we keep saying that we do. Well, then we have to be better. We have to actually practice civility.

“Civility” isn’t really my forte, but I guess the man does have a point.

Now, when Venables says “we,” it isn’t just a nebulous “you and me” statement. “We” was our whole industry, advertising as a whole. Because whether or not any of us want to admit it, our industry is powerful.

“Our entire industry chases its own ego,” said Venables, “but it could literally change the world.”

To that point, he’s not wrong. Advertising has this funny, insidious way of getting into culture and changing it.

I couldn’t help but fantasize a little bit as he said that, what the world would be like if agency principles were more focused on doing good than doing well. If instead of focusing on selling diamond engagement rings and Santa Claus drinking Coca-Cola, advertising championed fair trade, or pay equity?

But again, I digress.

He then took a moment to use his privilege and address the men in the room specifically.

He told the audience of his journey to manhood himself -- that while he initially believed manhood was about strength, about power, and about control, he realized that none of that is what makes a “real” man. What is a “real” man to Paul Venables? Someone who uses his strength for others.

Venables also implored the men in the room to “blow up the boy’s club” and for the love of God, to not use terms like “Ad Man” or worse, “Mad Man” ever again.

He then came back to the whole room -- and begged all of us, people and businesses alike to make our worlds “others-centric.”

Person to person means helping each other when we need it, whether it’s convenient or not. For businesses, that means taking some of those profits and picking up the slack that governments won’t.

Compassion, according to Venables is how we’re going to fix our “screwed up” world.

“My deepest desire,” said Venables, “is that compassion wins.”

Ultimately, what Paul Venables wants is for all of us to be kind. Or, at least, kinder. To “take care of our little corner of the world.”

Paul Venables wants us all just to be better people, because if we all work on being better people, then we’re all living in a world with good people, and thus, the world isn’t so screwed up any more.

And no, being kinder isn’t just a man thing. Us women could work on it too -- as evidenced by my initial reaction to Venables being a keynote speaker.

Maybe Paul Venables is a genius after all.